Yetii will be playing for us at The Plas Hotel on Thursday 17th November 2022. 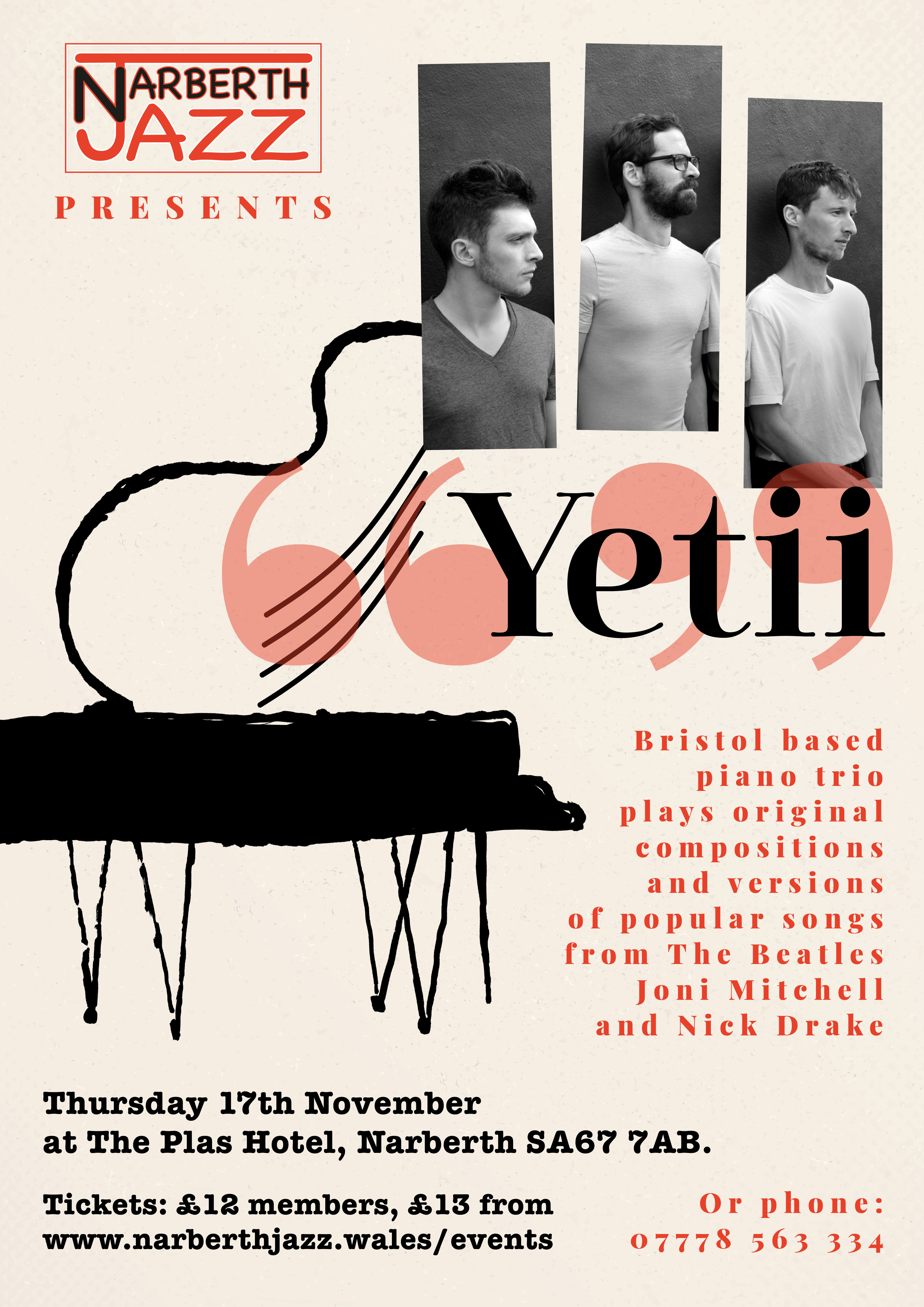 Narberth Jazz are happy to welcome ‘Yetii’ to Jazz at The Plas Hotel Narberth for this special one-off gig as part of their debut album UK Tour. Expect an intimate set of original compositions in addition to reworks of some of their favourite popular tunes from artists including The Beatles, Joni Mitchell and Nick Drake. Alex Veitch is the young pianist who was playing Mozart to packed local concerts aged 8, he was dubbed a “prodigy” in the local press. Alex completed his grade 8 aged 12 and won the prestigious local Harlow Young Musician of the Year Award.

Continuing to learn with Colin Stone of the Royal Academy of Music, Alex’s interest in jazz evolved from a method of individual experimentation and playing at local jam sessions. Constantly composing and trying new things, Alex was jamming at Ronnie Scotts at 16, heading down there with school friends on a Wednesday night and playing until the early hours.

He graduated from Cambridge University in 2013 where he played regularly with the Andy Bowie Quartet, and went on to study on the Jazz Piano Masters Program at the Guildhall School of Music and Drama, studying under musicians including Gareth Lockrane, Jason Rebello and Malcolm Edmonstone.

Alex counts Bill Evans, Keith Jarrett and Fats Waller among his main influences. In his spare time Alex enjoys active pursuits such as running and cycling: a county champion athlete and long distance cyclist from London to Barcelona in summer 2016. He also enjoys reading and taking photographs.

The band has been playing together for 5 years, with a monthly residency at The Greenbank in Bristol. They’ve had time to hone their sound and their style is very interactive, with segues between tunes and frequent forays in and out of improvised sections.

Here is a link to an original composition by the band called ‘Summer’: https://youtu.be/v194E3DHzg8

Here’s another clip from our debut single ‘Afar’: https://youtu.be/QXUpP4HelP8

They have launched an ambitious video project releasing a new full length track every Friday from May 2022 up until the album release in November! These videos have included collaborations with musicians including Jake McMurchie (Get the Blessing), Alun Elliot-Williams (Ishmael Ensemble, Waldo’s Gift) and Louise Victoria Hunt (We are Leif). All the band members are kept busy as sidemen and have worked with some of the UK’s top jazz musicians (John Law, Keith Tippett, Hans Koller, Nigel Price) and are looking forward to going on tour with their original music for the first time!