DUSKI at Haverhub has been postponed to a future date.

It began as a chordless trio in darkest Wales comprising of sax, double bass and drums, then guitar and piano appeared. Jazz styles disappeared and heavy jams with collective improvising took its place. The piano morphed into different synthesisers and tape loops and the double bass cracked open to reveal its electric counter part.  Standard chord progression melted away to reveal the dark minimalist progressive rock band that is Duski. 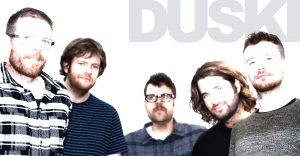 Duski toured the UK three times to promote their debut album. During this process, the band started developing new music that ended up dominating the set: a new album was on the horizon. The band entered Giant Wafer Studio in September 2018 and took three days to craft the new album . As the band was comfortable with the music and confident that three days was ample time to record it all, they were able to take time to muse on their new direction. Traditional form of melody and then lots of soloing took a sideline replaced by group improvisations based more on image and texture. Most of the album album was recorded live in a few takes along with overdubbing.